If the eyes are the windows to the soul, why would you paint anything else? The eye miniature was one of the oddest trends in late 1700s art. 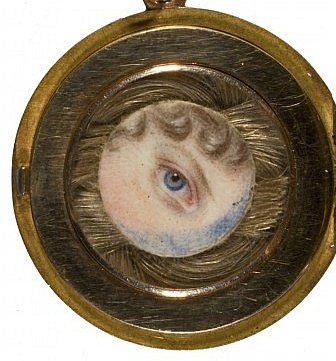 There are a few of these miniatures still around in galleries, museums, and private collections. It doesn’t really need much more description than I’ve already given: a painting of someone’s eye, usually on ivory, small enough to be carried around as a memento and sometimes accompanied by a lock of hair.

The trend supposedly began when the Prince of Wales fell in love with a Catholic (shock!) who had previously been married (double shock!). His great-great-whatever-grand-nephew would one day abdicate the throne for a similarly forbidden entanglement, but this prince was more subtle. He had an eye portrait painted in secret. It wasn’t enough to identify the subject, but enough to serve as a sentimental marker of love and regard.

Following this early eye portrait, that style of miniature became a fashion trend among the noble and wealthy for a few decades. As for the prince, he married his secret love in 1785, but the marriage was not considered official because the king hadn’t given his permission, so the prince later married his cousin instead. So romantic.

(One endnote: the picture above is of the prince’s daughter. Presumably this was a sentimental and not a romantic portrait.)