From 1996 onwards vast swathes of peat swamp in Borneo were cleared to make rice paddies. But then the swamp caught on fire. 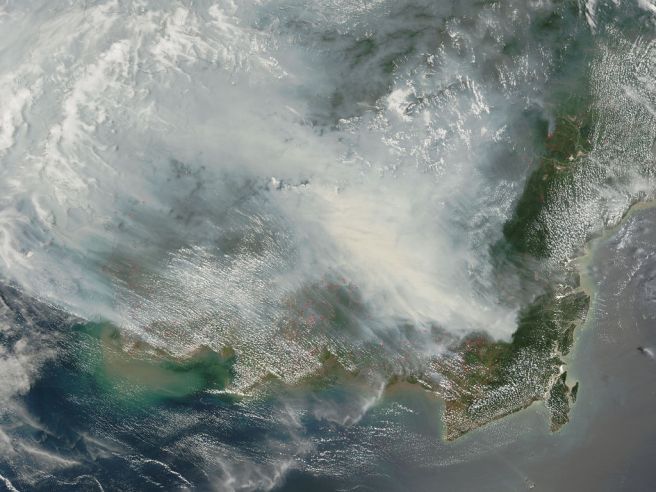 The peat swamps of Borneo are an ecologically important biome: tropical rainforest over a thick layer of peat that had accumulated over centuries. Peat is a big mass of soggy plant material that has become dense and compost-like. It grows, but very slowly (perhaps 1mm a year). Peat is important because it’s a great carbon sink. If you cut it up and dry it out it also makes great fuel… but it’s not so good for the atmosphere when you do so.

In the 1990s Indonesia had a food crisis, and in response began a project of clearing the rainforest to make way for rice paddies: the so-called Mega Rice Project. They drained the peat swamps in preparation for a rice paddy irrigation system. It was a disaster.

The peat swamp dried up. Dried peat is extremely flammable, and the Borneo peat was up to 12 metres deep. In 1997, it caught fire. 730,000 hectares (that’s 1,800,000 acres, an area larger than Delaware) burned, both above the ground and the ground itself.

This event led to perhaps the largest atmospheric carbon increase in modern history: estimates have put the damage at up to 2.57 gigatonnes of carbon. That’s a lot. For comparison, that’s the equivalent of 40% of all the fossil fuel burning for the whole world for a whole year.