The Witch of Endor

In the Bible, the Witch of Endor summons the spirit of the prophet Samuel from the dead. Translators and commentators since have been torn: is necromancy real, or was it all a trick? 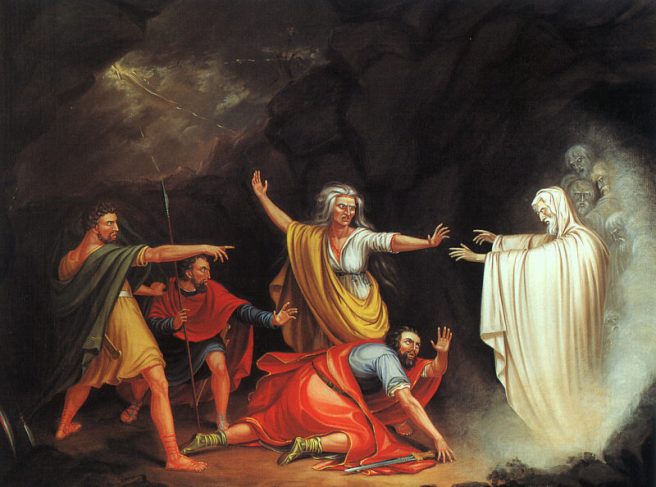 It’s no secret that the older parts of the Bible have some pretty wacky bits: murderous bears (2 Kings 2: 23-24), giants walking the Earth before the flood (Genesis 6: 4), and treatments for house mould (Leviticus 14: 33-53). But the Witch of Endor has given biblical scholars a lot of trouble.

Here’s the basic story as it appears in the First Book of Samuel from the Hebrew Bible / Old Testament of the Christian Bible. Saul, the first King of Israel and Judah, is about to go into battle with the Philistines. The prophet Samuel had already died and Saul really wants some advice, so he tracks down a necromancer called the Witch of Endor. She raises up the spirit of Samuel, who states that because of his lack of piety Saul will be killed in battle tomorrow. Sure enough, the next day he dies – either by his own hand (as recounted in 1 Samuel and 1 Chronicles) or by an enemy’s (2 Samuel).

So hey, does that mean we have biblical confirmation that necromancy is real? Rabbinical sources suggest that he was in fact raised, and even brought Moses along with him because he thought it was time for the Final Judgement. Moses, apparently, was a character witness. The Greek Old Testament (the Septuagint) called the witch out as a phony: it wasn’t the real Samuel, but the witch’s own voice thrown by ventriloquism. A biblical puppet show? Christian theologians, including Martin Luther and John Calvin, suggested that it was actually a demon taking the form of Samuel. King James (of The King James Bible fame) used that theory as proof that witches were real and should be persecuted. As far as I can tell the Catholic Church thinks it was legitimate necromancy:

The whole narrative of Saul’s visit to the witch of Endor (1 Samuel 28) implies the reality of the witch’s evocation of the shade of Samuel; and from Leviticus 20:27: “A man or woman in whom there is a pythonical or divining spirit, dying let them die: they shall stone them: Their blood be upon them”, we should naturally infer that the divining spirit was not a mere imposture.

Source: Witchcraft, from the Catholic Encyclopedia

(By the way, that entry goes on to explain that witchcraft was forbidden in the – and I swear I’m not making this up – 4th century CE Council of Elvira. Elvira! The Mistress of the Dark sure turns up in the funniest places.)