Cities at the bottom of the sea

423,000 people live in Flevoland, a province of the Netherlands. Before 1957, the entire area did not exist. 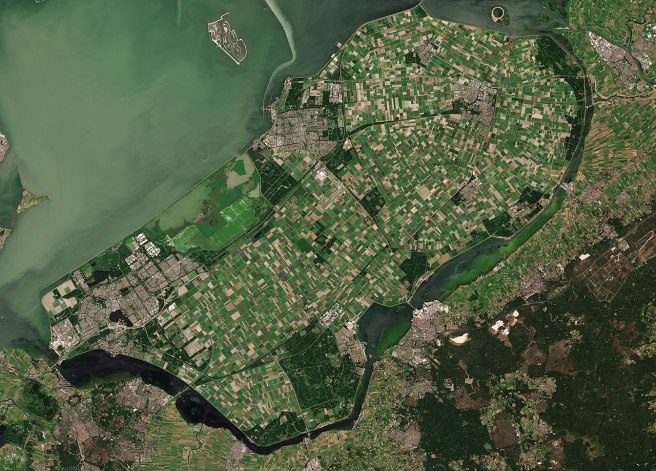 Remember the (probably apocryphal, or at least exaggerated) history of the French cavalry attacking a fleet of ice-bound ships off the coast of the Netherlands? The shallow bay that was the scene of that improbable battle – the Zuiderzee – is today much smaller than it was in the 18th century. In fact, much of it is now a province of the Netherlands.

How did this happen? Well, the Dutch are big fans of reclaiming land, and Flevoland is their masterwork. In the mid-20th century engineers erected a dam across the mouth of the Zuiderzee (the Afsluitdijk) and then encircled the bay with a series of dikes. Large pumps emptied out the water, and all of a sudden the bottom of the bay became habitable land.

The eastern part of the bay was reclaimed in this way in 1957; the southern part was sealed off in 1967. To allay the risks of flooding a couple of lakes separate Flevoland from the surrounding areas. This technically makes the province an artificial island, easily the largest such island in the world. The second-largest, Kansai International Airport in Japan, is barely one ninth the size.

Flevoland has a ripping great anthem, by the way. It begins, boldly,

Where we build up cities
at the bottom of the sea,

I learned about Flevoland while playing the excellent board game Pandemic: Rising Tide. If you’re on the lookout for a board game about the history of Dutch hydrological infrastructure engineering, by the way, I strongly recommend it.