Around 255 CE, a Chinese inventor named Ma Jun created a chariot that could always point south – without using magnets.

The south-pointing chariot had a small figurine on top, a little like a hood ornament in the shape of a pointing man. However the chariot turned, left or right, that figurine always pointed directly south. Incredibly, this was achieved mechanically, without the use of any magnets or compasses.

(Side note: the compass was actually known in China as far back as 200 BCE, but it was used to find directions for the purposes of good Feng Shui rather than for navigation. Proper travel compasses were in use in China from the 11th century CE onward.)

The design of the south-pointing chariot has a surprisingly long history in China. Some accounts place their original invention up to three thousand years ago. But the first actually reliable description of the chariot date back to Ma Jun, a master engineer of Three Kingdoms China. 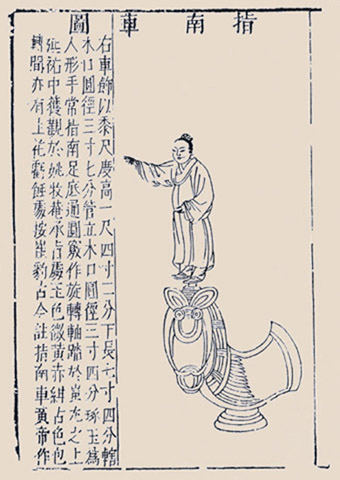 So the story goes, Ma Jun came across the description of a south-pointing chariot in an old text. A couple of contemporaries (believing it impossible) made fun of him. So Ma Jun built one himself. I have to respect a good spite invention, it’s the ultimate comeback.

While we don’t have a good description of the workings behind Ma Jun’s chariot, it’s a pretty good guess that it used differential gears. Essentially, the axles of the two chariot wheels were connected by a gear system that rotated the figurine according to the difference between their respective rotations. In other words, if the chariot turns left, the left wheel rotates less than the right wheel; if the chariot turns right, the right wheel rotates less than the left wheel; in either case, the gear system picks up the difference between their rotational speeds and turns the figurine to compensate. The result: the little man always points south. Pretty clever.

If this was in fact how Ma Jun’s chariot worked these would have been among the first differential gears in history. The ancient Greek Antikythera mechanism may have had one, but the first confirmed differential didn’t come out until 1720, when it was used in an equation clock design.