You can drive from northern Alaska all the way to Tierra Del Fuego in southern Argentina… except for a 106km gap in the road between the two. 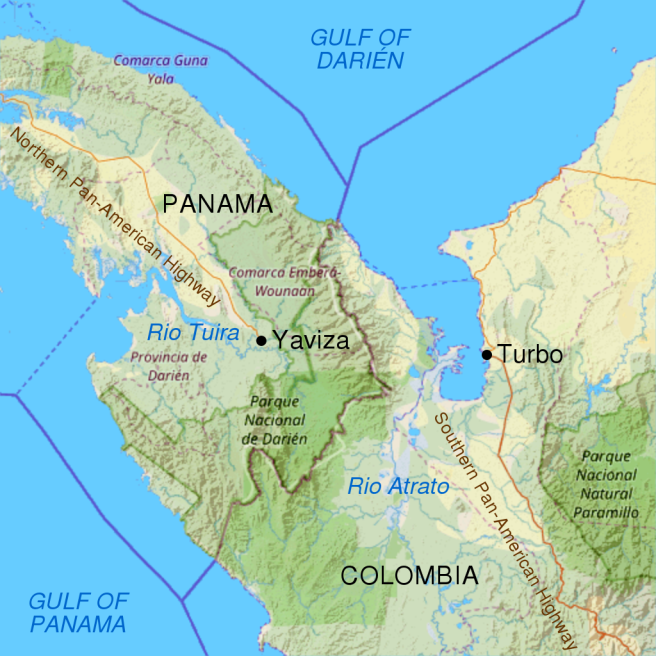 The Prudhoe Bay oil field, in Alaska is the largest in North America. There’s a little settlement of around two thousand people nearby, Prudhoe Bay, which exists mainly to house workers of the oil field. It’s also the unofficial starting point of the Pan-American Highway, a series of roads that span the length of the American continent.

From Prudhoe Bay, you can drive southwards through Alaska, Canada, the United States, Mexico, Guatemala, El Salvador, and onward all the way to Ushuaia, the southernmost city of Argentina, which is just 1,100km north of Antarctica. Or at least that’s the intention of the highway. In reality, this 30,000km road network has a tiny 106km break in the middle, between Panama and Columbia. This is the Darién Gap.

Now, I’m a completionist at heart, so a break in what would be one of the the longest road routes in the world bothers me. But there are very good reasons for this gap: political, ecological, cultural, and pragmatic.

The Darién Gap is divided by a large mountain range (Serranía del Baudó), with rainforest on one side and marshland on the other. Large portions of the area are a national park: it’s home to endangered species that would be vulnerable to exploitation if a huge highway were plowed through it. Two indigenous peoples live in the area, the Embera-Wounaan and the Guna, and they’re apparently not too fond of the idea of a road either.

Up until four years ago FARC, the Colombian guerrilla group, made any prospect of entering the gap a dangerous one – indeed, many tourists and would-be pan-American travellers had been kidnapped or killed in the area. Foot-and-mouth disease, the cow (and pig and deer and sheep and goats…) disease is present south of the gap but not north of it, and there are fears that opening up the area would help it spread further. So yeah, I’m convinced that this is a gap that should remain unfilled.

[Thanks to Shaun T. for suggesting this topic.]