On the impossibility of final proof

It’s my 200th post! Time to talk about the nature of proof, using 18th century literary hero Baron Munchausen and his horse too. 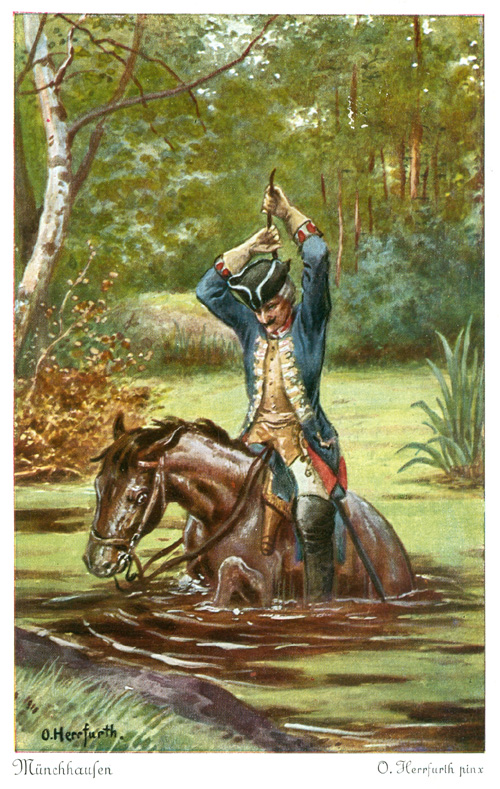 In writing these blog posts, I try to stick to facts which are externally verifiable. If I come across a particularly compelling story – like horses vs. ships or the queen’s duck – I will try to be clear about the evidence for it… or the lack of evidence. Usually I keep writing about it if the apocryphal story has interest despite being apocryphal. Horses vs. ships, for example, is an old lie that has been repeated and valorised and painted, and now carries some rhetorical and propaganda weight in the construction of French military identity. The queen’s duck tells us about effective management techniques to use on ineffective managers.

Some topics I have begun to write about, and then abandoned once their lack of proof became apparent. The famed Scottish surgeon Robert Liston supposedly had an operation in which the patient, the assistant, and a spectator all died – a 300% mortality rate! Great story, but as far as I can tell it was probably a 20th century fiction. Likewise, the story of the ghost libel lawsuit that is Booty v. Barnaby is really funny, but also completely made up.

All of this is just prelude to today’s topic: on the impossibility of proving anything absolutely. This philosophical concept has come to us via the Greek skeptics (Sextus Empiricus), German philosophers (Jakob Fries and Hans Albert), and the Austrian / British philosopher Karl Popper (who did his best work in New Zealand). It was Albert who gave us the term Münchhausen trilemma, and it is the trilemma that I’m writing about today.

Very roughly, you have something that you know or believe to be true. How do you know? You provide evidence, proof. But how do you know that proof is true? Well, you could provide some evidence for it… but then how do you verify that piece of evidence?

Let’s try an analogy. How do you define a word? Well, you look it up in the dictionary and other words give you a definition. But in order to understand the definition, you need to know the meaning of the other words. And each of those definitions leads to other definitions…

Do any of those feel particularly satisfying? Or do they feel something like Baron Munchausen pulling himself and his horse out of a sinking swamp by his own hair? In other words, impossible.

This, then, is the Münchhausen trilemma: is knowledge infinitely regressive, circular, or axiomatic? It is a problem that runs like a seam of gold (or fool’s gold) through Western philosophy. It is a question for every academic discipline – yup, including mathematics, thank you very much Kurt Gödel.

I don’t have the answer, sorry. Better people than me have tried, and many are still trying today.