Launched and sunk in one day

King Gustavus Adolphus of Sweden really wanted a big ship so he could dominate the Baltic. The Vasa was one of the most heavily armed ships in the world when it launched in 1628. But the same day it launched, it sank. 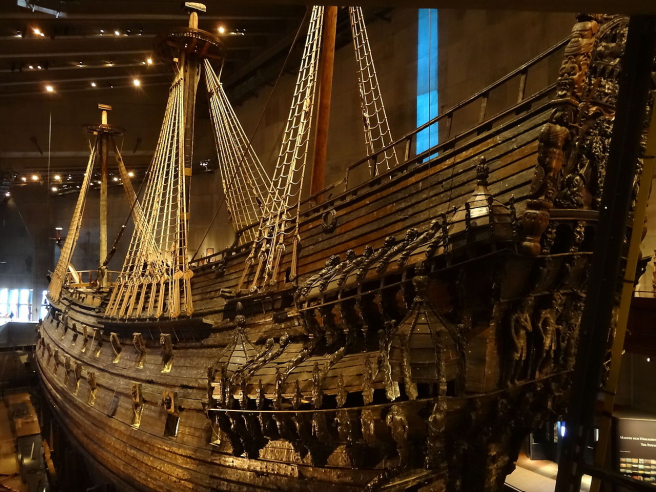 The Vasa was supposed to be a terror of the seas. Gustavus was at war with Poland-Lithuania and the existing navy was insufficient for his needs. In 1627 he lost his rather pathetic flagship to the Poles and one of his other ships was blown up by its own crew. But he already had something better in mind.

Adolphus was out to intimidate, ready to impress, and the answer was clear: more guns. In 1625, he had commissioned a ship like none other in the Swedish navy, with two gundecks and 64 guns. In raw firepower it was one of the most powerful ships in the world. From only one side of the ship it could fire 267kg of shot.

The ship never got the chance to try it out in battle. The Vasa had a fatal flaw. It was too high and too narrow, and the weight of the guns was all concentrated near the top of the ship. It launched on 10 August 1628, was hauled out into the bay, set sail, was hit by its first gust of wind… and sank.

The wind had tipped it over just enough for water to go into the gunports and fill up the hold, and it was all over. Thirty people died and the ship was lost. It had travelled only 1300 metres from the shipyard.

That’s not the end of the story. In 1961, the Vasa was raised, cleaned up, preserved, and put on display. The video below shows its reappearance from the depths, 333 years after it sank. You can visit the Vasa today at the Vasamuseet in Stockholm. I’ve been there, and it’s still one of the best museums I’ve ever visited.